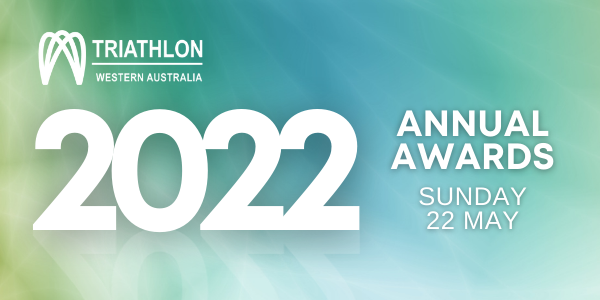 The Triathlon WA 2021/22 Annual Awards will be held on Sunday, 22 May at Ambrose Estate in Wembley. The Sundowner event will commence at 3:00pm and conclude at 5:30pm. Tickets on sale soon.

Triathlon WA is calling for nominations for the below awards. Nominations close 5pm on Tuesday, 26 April.

The Service to Sport Award is intended to recognise an individual who has demonstrated outstanding
service to the sport of triathlon over an extended period of time. This Award allows for recognition of
an individual whose service may not be directly associated with TWA but has provided significant
benefit to the sport at a club, event or other association level.
Nomination for the Service to Sport Award will be called for in conjunction with the call for Life
Member nominations. Individuals nominated for the Service to Sport Award will be assessed by the
panel convened to consider TWA Life Memberships. The panel will present recommendations to the
Board who will make final decisions on successful nominees. In selecting a recipient, the Board will
take into consideration:
• Service to the sport over an extended period (minimum of ten years)
• Service to the sport above and beyond what is normally expected
• Significant leadership in the sport
• Contribution to the enhanced standing of triathlon in the community
• The recipient being in good standing with TWA

Coach of the Year Award

This Award is intended to recognise individuals who demonstrated a commitment and dedication to
coaching Western Australian triathletes, and who have helped Australian triathletes to achieve
significant competition success at both the age group and the High-Performance level.
To be eligible for the Award nominees must be current members of TWA and a currently accredited
triathlon coach at the time of their nomination.

Community Coach of the Year Award

This award is intended to recognise and honour Western Australian triathlon coaches who have
demonstrated a commitment and dedication to coaching WA triathletes over the previous season.
To be eligible for the award, nominees must be current members of TWA and accredited triathlon
coaches at the time of nomination. Nominees will be considered based on their coaching of age
group triathletes and proven demonstration of;
• Engagement
• Integrity
• Community
• And commitment to growing the sport of triathlon in WA