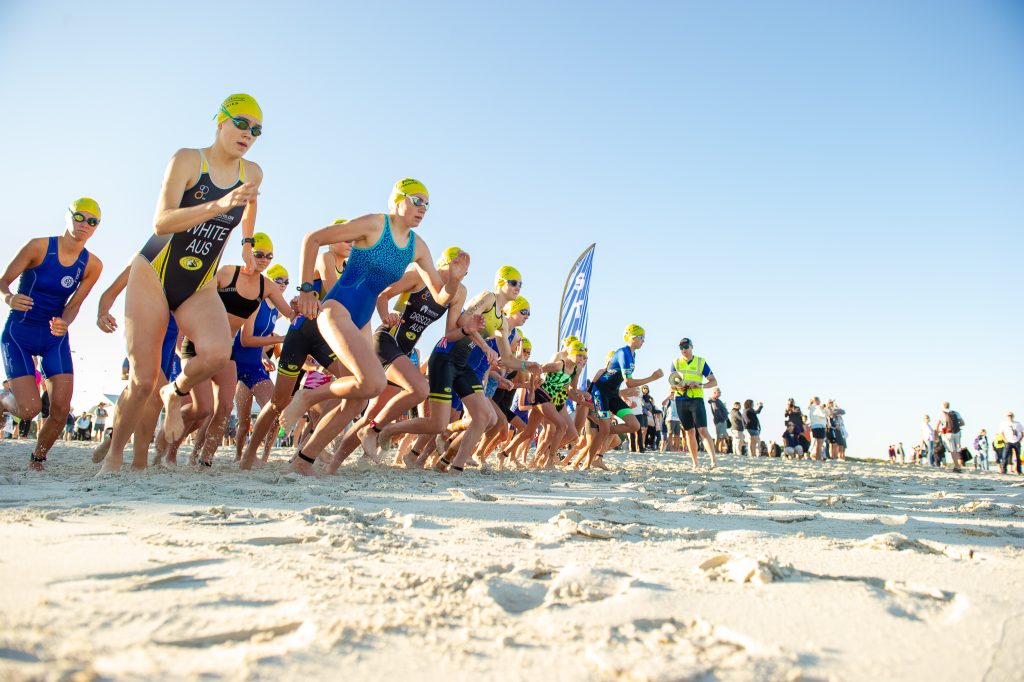 Quest for Glory at the State Sprint Champs 2021

The Triathlon WA community is on a high after the GWM Ironman in Busselton last weekend. It was a particularly big week for WA athlete Matt Burton (Oceanic) whose first child was due on race day! Luckily, bub arrived a few days early so Matt was able to race down to Busso and claim the Ironman title.

There is no rest for the wicked with the third Triathlon WA State Championships event taking place this Sunday, 12 December at Whitfords Nodes in Hillarys.

The City of Joondalup Coastal Quest is an event not to be missed as it returns to the iconic Whitfords location after road works forced a move in 2020. Over 500 athletes will take to the start line on the stunning Northern Beaches of Perth. Triathletes will be treated to pristine conditions following a scorching hot week in Perth.

The competition will be just as fiery with several athletes vying for Triathlete of the Year (TOTY) points at the State Sprint Championships. Equal first on the male leader board, Zeke Tinley (Bunbury) and reigning Ironman Matt Burton (Oceanic) will be eager to separate their standings and claim the top spot after round three. Guy Crawford (Fremantle), Jonney Sammut (UWA) and Kurt Wesley (North Coast) will bring the fire in the Open Male category, putting Zeke and Matt to the test. David Bryant (Oceanic) returns to the State Series scene after a successful Paralympics campaign in Tokyo earlier this year.

After a third-place finish at Ironman last weekend, Kate Bevilaqua (Fremantle) will be lining up against Katherine Ryan (Stadium) and young guns Aleisha Wesley (North Coast), Indie Arbuckle (Team XTR) and Madison Toovey (North Coast). Ryan stepped up to the Open Female category this season and has already established herself as a strong contender for the TOTY crown, finishing third in the State Duathlon. After winning the first two State Championship events, Wesley will be hoping to increase her early lead with another win this weekend.

The Brynt McSwain trophy will also be up for grabs this Sunday as it is once again awarded to the fastest male triathlete at the Triathlon WA State Sprint Championships. Brynt McSwain was a Triathlon WA member and previous State Champion across several distances in the sport. Brynt was one of a kind that contributed hugely to the triathlon community.

He tragically lost his life in October 2014 when he was knocked from his bike commuting home from work. Brynt’s life and legacy is celebrated on an annual basis through this trophy that his named in his honour.

Jonney Sammut (UWA) will be seeking to pull off a hat-trick and hold on to the title after winning the Brynt McSwain trophy for the last two years.

Whilst the City of Joondalup Coastal Quest is a Triathlon Australia Age Group WT World Championship Qualifying race, there is something for everyone, with a selection of short races including Sprint, Bolt, Duathlon, AquaBike and TinLins.