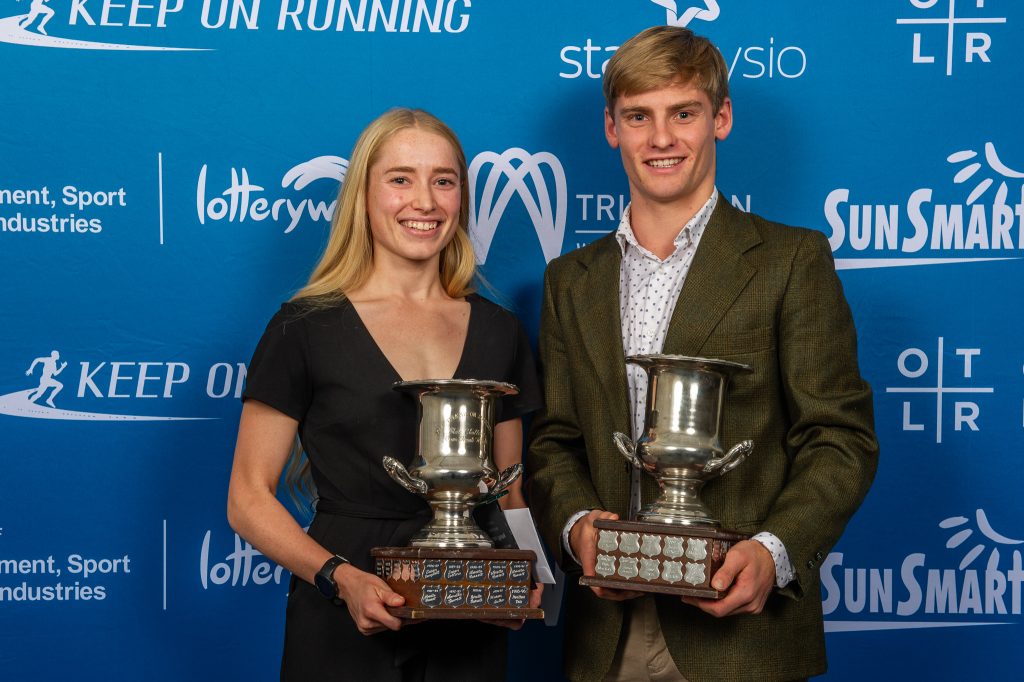 On Sunday, 22 May 2022, the 2021/22 Triathlon WA Annual Awards were held at Ambrose Estate in Wembley. Nearly 200 guests including TWA members, club committees, Board, staff, sponsors, life members and the Member for Churchlands, Ms Christine Tonkin MLA attended to celebrate the many successes across our sport over the last 12 months.

Triathlon WA would like to congratulate the below award winners on their achievements and contributions in the 2021/22 season. We look forward to welcoming everyone back in 2022/23 for another fantastic year of racing.

The Technical Official of the Year Award has been acknowledged since 2000. The Award was renamed in 2007 in honour of TWA Life Member, Steve Barrie to recognise his significant contribution to our sport.

Sadly, Steve Barrie passed away in 2020 so he cannot be here to present the award which he did for a number of years. Steve will always be remembered by the triathlon community as an athlete, volunteer, board member and highly regarded official within the sport.

This award is presented annually in recognition of the service and dedication of a Technical Official to the sport.

Awarded to the Technical Official of the Year on the recommendation of the TWA Technical Reference Panel, the Steve Barrie Award recognises an individual’s valuable contribution to the technical program based on their regular participation in the Field of Play (minimum of five events in the season) and their contribution to the progression of the program throughout the season.

This year, the Steve Barrie Award was presented to two deserving winners:

Catherine and Mike completed their Technical Official course in October last year and since then have held a number of roles within the technical teams across the season. In total they have officiated at a combined total of 17 events since October.  Both have made considerable contribution to the technical program, and we thank them for their service.

The following service to sport awards were awarded:

For 5 years of service:

For 10 years of service:

For 15 years of service:

For an incredible 25 years of service:

Rob is the first person in WA who has served 25 years since the program started. This is an outstanding achievement and we thank Rob for everything he adds to the Triathlon WA community.

The Community Coach of the Year Award, now in its second year, aims to honour those who do outstanding work in coaching non-elite age group or junior triathletes. Winners of this award will demonstrate outstanding engagement, integrity, community spirit and commitment to growing the sport of Triathlon in Western Australia.

The winner of this award organised training and information sessions for club members and created a welcoming environment for athletes of all ages and abilities. He is a supportive, positive and encouraging coach for a wide range of athletes and is particularly engaging with his juniors. Along with being an athlete himself, his can-do attitude, passion and commitment is portrayed through his coaching, and his athletes have achieved some fantastic results this season under his guidance.

The 2022 Community Coach of the Year Award was presented to Armadale Tri Club’s Founder and President, Alex Barron.

The TWA President presents this Award to the person deemed to have made the most outstanding contribution to the sport of triathlon through the past season.

This year’s winner works tirelessly behind the scenes as President of Perth Tri Club. The club has seen significant growth in membership over the last few seasons under her leadership. She is always engaged with Triathlon WA and our initiatives and continues to drive club development and participation opportunities within the club.

The Service to Sport Award is intended to recognise an individual who has demonstrated outstanding service to the sport of triathlon over an extended period of time. This award allows for recognition of an individual whose service may not have been directly associated with TWA but has provided significant benefit to the sport at a club, event or other association level.

The 2022 Service to Sport Award recipient is Mathew Jennings.

Mathew has seen this sport from many perspectives, an athlete, a mentor, a committee member, a president, a technical official and as a coach. The knowledge he has obtained is invaluable and he has always been willing to share it. Matt has been an active member within Triathlon WA for over 30 years and is a Triathlon WA Long Course Legend. As President of Stadium Tri Club, Mathew was crucial in starting up the Karri Valley Triathlon, still a feature on the TWA event calendar to date. Mathew has consistently advocated the benefits of being associated with TWA and his beloved Superdrome / Stadium Tri Club.

We thank Matt for his continued support and dedication to the Sport of Triathlon in Western Australia.

The Individual Performance of the Year Award is intended to recognise the most outstanding performances or one-off performance of West Australian athletes in the preceding twelve months including WA athletes racing ITU and WTC events.

This year’s winner is David Bryant for his performance at the 2020 Tokyo Paralympics.

This award is for outstanding commitment, improvement and performance throughout the season for an athlete in our Development Program. As well as attendance and attitude at training, commitment to team values and interaction, skills growth and continued improvement.

The TWA Development Athlete of the Year for 2022 is Rhianna Hepburn.

Rhianna is part of our Talent Program within WA, and she won the Oceania Junior Championships held in Victoria earlier this month.

The Junior Triathlete of the Year Series comprises a number of races specifically selected for junior triathletes aged 12 to 19 years of age. Awards are presented to the three highest point scoring male and female athletes in each of the junior age groups. An athlete’s best four (4) results from Junior Triathlete of the Year Series events are considered.

The Champion Club trophy is awarded annually to the club whose financial members accumulated the most points across the Triathlete of the Year Series. This includes both the Senior and the Junior Series’. Points are weighted on a per member basis.

The TWA Interclub Competition is divided into three regions throughout WA. Clubs accumulated points through their members’ participation and performance at events listed on the Interclub Series Calendar. These events included metro and regional races chosen strategically due to their location and popularity amongst our membership.

We would like to thank the near on 1500 club members who participated in the Interclub Series, the Race Directors who hosted an event within the Series and the clubs for embracing the competition. There were some great displays of camaraderie throughout the season and it was fantastic to see so many TWA members wearing their club colours.

The winner of each conference received $250 for their club, with the overall Champion Club receiving an additional $500.

The winner of the North Conference is NORTH COAST TRI CLUB

The winner of the South Conference is MANDURAH TRI CLUB

The winner of the Regional Conference is BUNBURY TRI CLUB

The winner of the 2022 Interclub Overall Champion, for the second year in a row is NORTH COAST TRIATHLON CLUB

Awards are presented to the three highest point scoring male and female athletes in each senior age group. An athlete’s best seven (7) results from the State Series events will be considered.

Awards are presented to the top five male and female triathletes in the TWA Open Category. An athlete’s best seven (7) results from the State Series events will be considered.